Cyborgs are cybernetic organism; that is, a living organic sentient organism with mechanical prostheses. Cyborgs are playable species,[1] they are available for all classes for free-to-play accounts.

Cyborgs are individuals who have undergone surgery to either replace or enhance parts of their natural bodies. Augmentations can range anywhere from simple subdermal implants, to full body prosthesis. As of the game's initial pre-release access, only former humans are playable cyborgs, though rattataki varients can be seen during the Imperial version of the Korriban Incursion tactical flashpoint. Additionally, a Chiss cyborg can be seen when taking a bounty on Dromund Kaas. 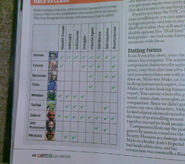