"During the Great War, the Jedi Order was granted use of Republic military vessels, but these starships proved unsuitable for the specialized assignments Jedi often undertake. Eventually the Jedi Council decided to commission a new corvette, custom-built for Jedi missions. The Defender-class corvette is built on two decks. The lower deck is based on a standard keel and houses a cargo hold, engine compartment and full medical bay. Most of the Defender’s customization is on the flight deck, which includes a private cabin and meditation chamber, along with a state-of-the-art cockpit. At the center of the ship is a spacious conference room equipped with a holo communicator for discussions with the Jedi Council or diplomatic talks. Although peace is a key tenet of the Jedi, so is self-defense. In case of hostile action, the Defender possesses a high-powered shield array and twin laser cannons."
―In-game Codex (Starship)[src]

The Defender-class light corvette is a light corvette starship. During the Great Galactic War, the Jedi Order was granted use of Republic military vehicles, but these starships proved to be unsuitable for the specialized assignments Jedi often undertake. Eventually the Jedi High Council decided to commission a new corvette, custom built for Jedi missions only.

The first of these vessels produced was to be piloted by a member of the Jedi Order during a test flight. Before the Jedi arrived however, the ship was infiltrated by Hylo Visz, a Mirialan smuggler who had been betrayed by the Rendili Corporation. Visz attempted to steal the ship, but was interrupted when the Jedi client arrived for the test flight and boarded the prototype. The smuggler was determined to pilfer the experimental project however, and so assaulted and incapacitated the Jedi. After dumping him on landing pad A-23 of the Rendili Corporate facility, Visz departed Corellia and used the ship as her own personal smuggling vessel. [1] Though the prototype had been stolen, the theft did not hinder the Rendili Corporation from production of the ship for the Jedi Order. Visz later named the prototype Vanguard.

In the years following the years after the Jedi Civil War, when the remnants of the Sith Empire led by Darth Revan had been destroyed, the Republic kept a presence in the space around the ancient Sith world of Korriban to prevent any Sith from resettling there. When the Sith Empire, destroyed at the conclusion of the Great Hyperspace War, returned to Republic space, at least one of these Defender-class corvette was patrolling the planet. It was destroyed by the Imperial fleet as the Empire retook it's sacred training and burial world.

These ships would later be used during the Cold War as the personal ship of the Jedi Knight character and the Jedi Consular character that served as their home base when on missions for the Jedi Council and against the Sith Empire. As the Jedi Knight's ship would help attack against the The Emperor’s Space Station orbiting Dromund Kaas to capture the Sith Emperor and turn him to the light side. Unfortunately this mission would fail and the Jedi Knight along with Jedi Master Tol Braga and two other Jedi Knights would be brainwashed into serving the Emperor on missions to recreate the conditions for the Emperor's ritual. Thanks to the help of Jedi Master Orgus Din, the Jedi Knight was able to overcome the brainwashing and was able to rescue Kira Carsen and the other members of the ship's crew with the help of the Emperor's Wrath, known as Lord Scourge. They escaped the station and returned to Tython and continued to fight against the Empire.

The corvette has a smooth hull and is propelled by two circular engins, the cockpit rested in a hammerhead-style outcropping, similar to that of the Thranta-class corvette, although oriented horizontally instead of vertically. The interior of the vessel boasted a state of the art holo communications terminal and lush furnishings, as well as back lit controls in the cockpit, allowing for dimmer lighting. 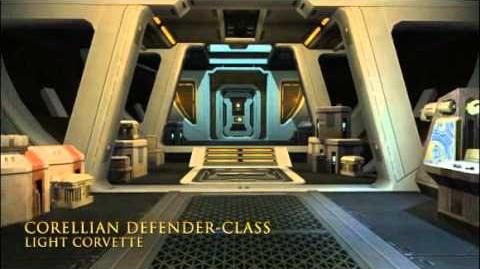