The Lightsaber (known as a "Laser sword" to those who are unfamiliar with the term) is a distinctive weapon, the very image of which is inextricably bound with the myth of the Jedi Order and their polar opposites, the Sith. The lightsaber has also become a symbol of the Jedi Order's dedication to upholding peace and justice throughout the galaxy.

The weapon consists of a blade of pure plasma energy emitted from the metal hilt and suspended in a force containment field. The blade is not actually a line, but a loop that extends about a meter before being arced by the blade containment field to a negatively charged fissure ringing the emitter, where it was channeled back to the power cell by a superconductor, completing the circuit. The field contains the immense heat of the plasma, protecting the wielder, and allows the blade to keep its shape. The hilt is almost always self-fabricated by the wielder to match his or her specific needs, preferences and style. Due to the weightlessness of plasma and the strong gyroscopic effect generated by it, lightsabers require a great deal of strength and dexterity to wield, and are extremely difficult - and dangerous - for the untrained to attempt using. However, in the hands of an expert wielder of the Force, the lightsaber is a weapon to be greatly respected and feared. To wield a lightsaber is to demonstrate incredible skill and confidence, as well as masterful dexterity and attunement to the Force.

The lightsaber of a Jedi Knight or Consular almost always uses a natural force-attuning crystal in their hilts. These crystals are found on planets across the galaxy, most notably on Ilum and Dantooine. The natural crystals produce green, blue, cyan, yellow, or violet blades. Jedi typically forge their own lightsabers at the conclusion of their padawan training.

The lightsaber of a Sith Inquisitor or Warrior sometimes uses an artificially fabricated crystal. This crystal typically produces a red blade, though molecular changes made during fabrication can result in different colors. Upon creating their lightsaber most Sith apprentices are given crystals to use, however some prefer to fabricate their own. Sith usually receive their lightsaber from other fallen Sith at the conclusion of their acolyte training.

Classes that use lightsabers:

The creator who channels their force into the crystals imbues it with a color based on the type of force energy being used as well as how powerful that energy is. Rare crystals can be found which will automatically determine a lightsaber's beam color.

A lightsaber requires the following components (x2 for Double-Bladed); 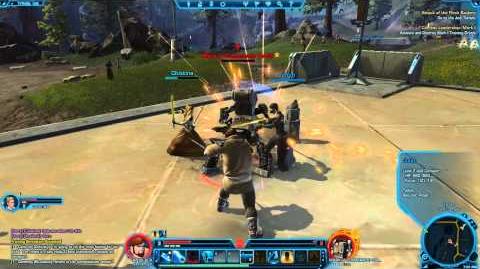 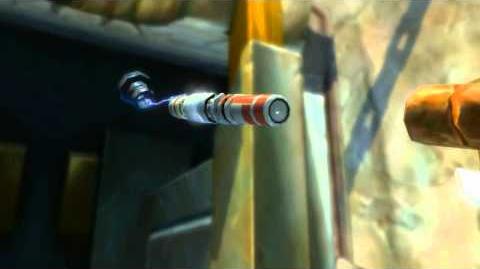 Retrieved from "https://swtor-archive.fandom.com/wiki/Lightsaber?oldid=115226"
Community content is available under CC-BY-SA unless otherwise noted.