"Although the name “Sith” is now used by the order of Force users who call upon the dark side, the term originally referred to a Force-sensitive species of red-skinned humanoids. The term “Sith pureblood” is now used to distinguish between those descended from the species and the order itself. The Sith species was discovered three thousand years ago on Korriban by exiled human Dark Jedi fleeing Republic space after their defeat in a war called the Second Great Schism. The Dark Jedi quickly enslaved the primitive culture, and over many generations, the two groups intermingled. Eventually, the elite ruling class of Korriban consisted almost exclusively of the hybridized offspring of the Dark Jedi and the high priests of the Sith people. These offspring tended to exhibit the physical characteristics of their Sith parentage, such as red skin, yellow eyes, bony protrusions on the face or head, and fleshy tendrils dangling from the cheeks and chin. For a brief time, Sith blood was seen as a sign of weakness–but the modern Empire believes purity of heritage carries the strength of the Force. Genetically speaking, true “pureblood” Sith are virtually extinct, but red skin is still the mark of an Imperial–almost always a Force user–who can trace his or her ancestry into antiquity."
―In-game Codex (Species)[src]

Descendants of the original Sith species, the red-skinned Sith Purebloods inherit a legacy long intertwined with the dark side. The ancient Sith were warlike, competitive, and ambitious, and they performed arcane rituals to create powerful Force artifacts. For those Sith in whom the old blood still flows strongly enough to be seen, there exists a strong current of innate darkness, making the rate of Force sensitivity among purebloods near one hundred percent.

Three thousand years ago, Dark Jedi, fleeing Republic space after the Second Great Schism, discovered the Sith species on Korriban. They were surprised to find that the comparatively primitive species displayed knowledge of the dark side that the Jedi themselves had never encountered. The Dark Jedi resolved to subjugate the Sith and wrest their knowledge from them. Though the Sith struck back in an attempt to protect their dark side secrets, they were ultimately outmatched by the superior training and technology of the invaders. The Sith were enslaved by their Dark Jedi overlords.

Over hundreds of generations, the two groups intermingled. The Dark Jedi found that Sith society and culture suited their philosophy well. Before long, the elite ruling class of Korriban consisted almost entirely of hybridized offspring of the Dark Jedi and the high priests of the Sith. This hybridization resulted in an ambitious, ruthless race with a natural strength in the Force.

Genetically speaking, the term “pureblood” is a misnomer, as all modern Sith are hybrids, a product of the unions between the ancient Dark Jedi and the original Sith race. However, the term is useful in distinguishing those who carry enough of the blood of the ancient race to still be evident in their features.[1]

Classes that can play as this race are Sith Warrior and Sith Inquisitor. Though it may seem that Sith Pureblood Warriors seem more fitting to the story, Sith Inquisitors eventually find themselves with a long, glorious heritage. It would appear even displaced Sith Purebloods, due to circumstance or time, are destined for greater things than slavery. Some conversations in the both class quests have been altered to fit the Sith Pureblood status.

A female Pureblood and her Sith Master. 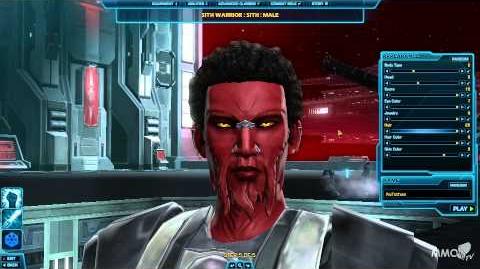