The game includes a taxi system which allows the players to travel for a few credits to certain locations they have visited before on the same world. Those taxi terminals they travel to must also be unlocked, with the exception of some planets such as Coruscant. The vehicle (or maybe even mount) used depends on the planet.

A Taxi NPC on Dromund Kaas 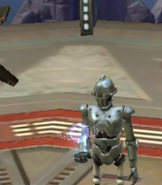 A Taxi NPC on Tython

Community content is available under CC-BY-SA unless otherwise noted.
Advertisement